This morning, like all but one morning when we had to meet Nick before breakfast started, we had breakfast at the tables along the outside of the restaurant. Despite the thatched umbrellas, it’s a little hard to stay out of the sun, which is quite strong even early, but it’s really nice having breakfast right on the beach. A full breakfast comes with the room, yummy fresh juice, different every day, and a choice of pancakes, yoghurt and granola, or scrambled eggs with rice, beans, and guacamole. I think there’s an all-bread option also. And a plate of fruit with whatever you order.

I was trying to figure out how to get in touch with the people who give the kayak tours of Sian Ka’an, the nature preserve just south of Tulum. Their email permanently rejects and their phone doesn’t connect. I think they have a cell phone deep in the preserve and it just won’t connect, but it is really frustrating, because you can’t just drive there. It’s deep in the preserve and you need a Jeep at least.

So finally we decided to head to Punta Laguna instead. It’s a Mayan preserve near Coba, to the west. It took about an hour to get there and there was a time when we felt like there could be nothing on the road. It was just mile after mile of nothing. I was going to give it 15 more miles and then give up, but we got there. They offer rappelling into a cenote, zip line, canoeing, and other things, but they were all really primitive. What we went for was the monkeys. They have several families of spider monkeys, a few hundred in all, and some howlers. We paid our 70 pesos each plus 300 pesos for the tour guide, for what was supposed to be an hour’s tour to find the monkeys. (That’s about $26 total.)

We met our tour guide, Jose, who has his two front teeth rimmed with silver. The place is completely Mayan-run. Jose didn’t say much, just started out through the jungle. The jungle is paved with limestone with crunchy leaves over it. It is scrubby and not all that dense, with what we use as houseplants here and there on the ground. We tromped for quite a while and then came to the deserted thatched shelter where the zip line was.

Jose told us to wait there while he looked for the monkeys. He was communicating on a walkie talkie now and then as well as stopping to listen, but he took off by himself for about 20 minutes while we waited at the zip line. We saw a hummingbird while we were there. Otherwise, we were just hot.

Jose came back and started us off after him again. Termites nest on a tree 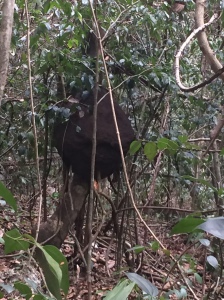 and chicle tree that had the chicle harvested.

We came to the lagoon, 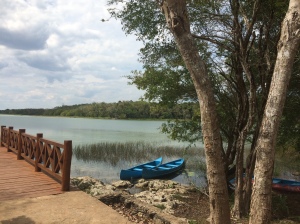 and walked past it a little while and he pointed up, and there they were. Tiny little faces, long, long arms and tails, swinging, chomping on the little fruits.

After a while, Jose pointed out a mother with a baby clinging to her chest, That baby was about a month old and it climbed off and we could see it getting its own berries and eating them and trying different ways of getting to the berries. It was beyond cute. Then Jose pointed out another mother with a baby, and said that baby was probably about ten days old. Every now and then we could see its face, especially when Jose loaned us his binoculars. The adults’ faces are pretty tiny, the baby’s so much more so. Its little face was all black fur with little patches of beige for eyes and mouth.  I recommend viewing the videos in full screen as it was quite difficult filming something so high up.

We stood and looked and Jose showed us the cave where the monkeys hide during bad storms and where they go to drink, and then we stood and looked some more and some more. I don’t know how long we were there, but he didn’t hurry us one little bit. We finally indicated that we were ready to go. I had planned to give him 50 pesos as about 15% of the 300 for the tour, but I gave him 100 and thanked him profusely for working so hard to find the monkeys and letting us stay to watch them for so long. 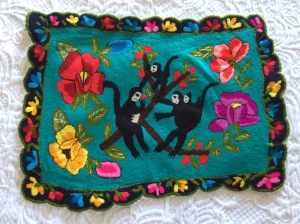 We headed back and went back to the beach road in Tulum to find somewhere to eat. Almost every restaurant takes cash only and most of the ATMs on the beach road dispense US dollars. It is the weirdest thing. So we had a drink at a restaurant we had seen that looked well-populated and realized we didn’t have enough cash and the ATM was dollars only. It turns out it was something of a grill with very little fish or vegetarian, so it wasn’t really a disappointment to just have drinks. Isabel’s drink was sake and Grand Marnier and mint and grapes. It was fantastic. Have to try it.

We drove off and amazingly found a parking spot on the road and walked until we found a peso-dispensing ATM. We went back to a restaurant that we thought looked good and it was fully booked. So we went back to one that we had walked past, Cenzontle, “jardin secrete” (secret garden). We had this amazing octopus, pear, fruit paste appetizer, where Isabel learned she likes octopus, at least when prepared amazingly well, Then we had sea bass with some kind of leaf over it and lentils and fried coconut and pieces of plantain. It was amazing. Both of us had become somewhat resigned to the food being OK here, but this was fabulous. Vanilla ice cream with dolce de leche and fried carrots on top. Yum.

But the most delicious thing was Isabel’s drink. (I didn’t have another one because of driving.) It was called a Mme. Piaf and was made of pineapple, amaretto, coconut milk, marscapone, and rum. It was amazing. I don’t know if it’s unique to Cenzontle, but we’ll have to try to reproduce it.

Back to the cabana, showers, collapse!  Two towel sculptures tonight! 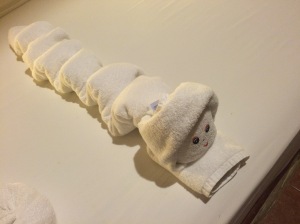