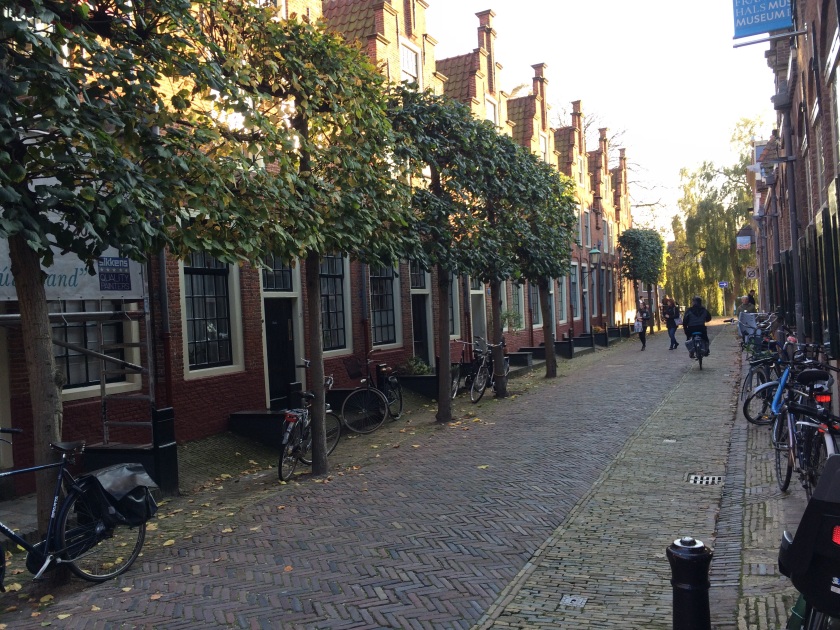 We went to out Waterlooplein Metro stop this morning, near the “Stopera”, combination state house and opera. Jim had read about this line in the sidewalk outlining the perimeter of an orphanage for Jewish children, which was emptied by the Nazis, all the children sent to camps.  Another sobering reminder.  When we were in Paris in 2007, there were many plaques showing where people had been killed during the war.  While sad and disturbing, it is good to see these kinds of commemorations and reminders. 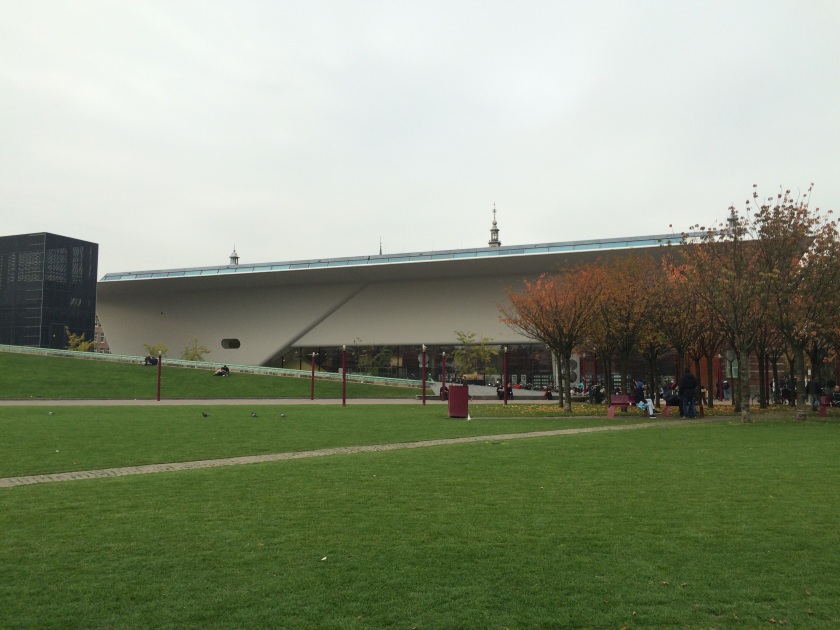 We spent from 10:00 to 3:30 at the Van Gogh Museum. It is very nicely laid out, with his work going chonologically. There were sufficient descriptions, but not too many. What’s really lovely is that no photography is allowed (and we saw only two people taking illegal pictures). So there are people listening to their audio tours who will stand in a prime viewing spot for a painting for what seems way too long, but no jockeying for position for the best angle to take a photo, no selfie sticks, and while it was crowded, not nearly as crowded as New York museums seem to be without exception all the time now. 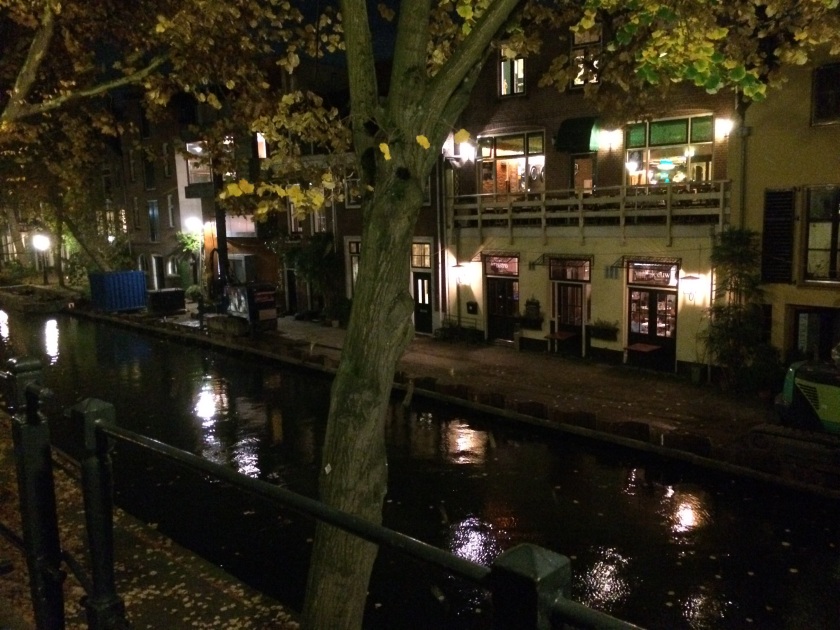 We took the train to Utrecht, only about a half hour away. There were several windmills along the train route, and cows and sheep. The animals are not fenced in. They seem to stay in their fields because of small canals bordering the fields, although I think I might have seen an electric fence along one of the bordering canals. 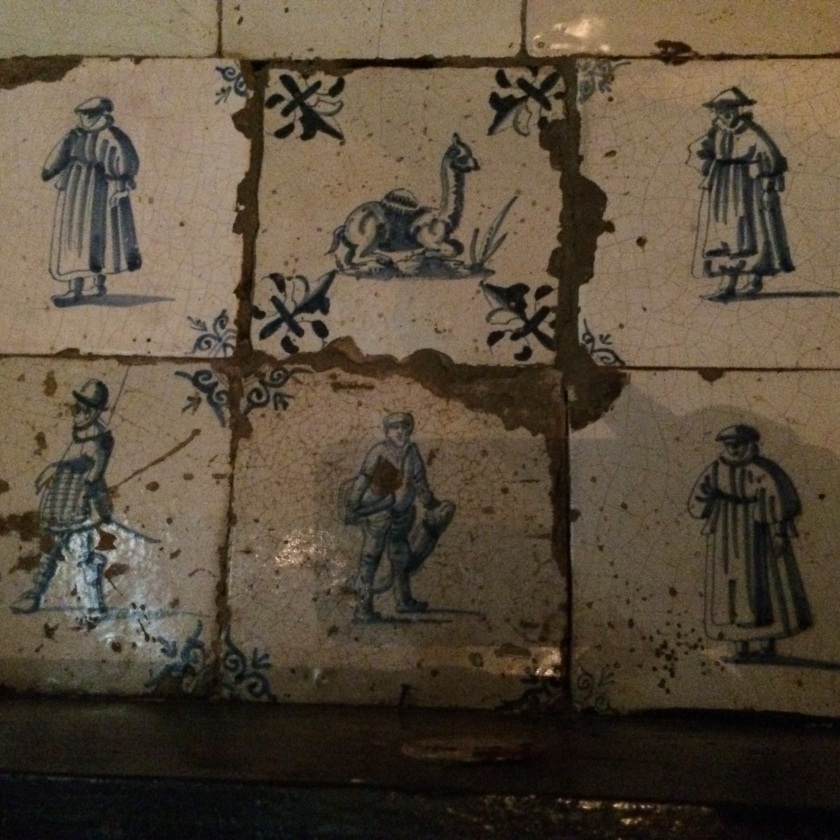 We didn’t hurry this morning, but got out about noon.  (It’s wonderful but also exhausting taking in so much all day!)  It was a beautiful, sunny day, so we decided to do a lot of walking.  We started out towards the Oude Kirk (Old Church). 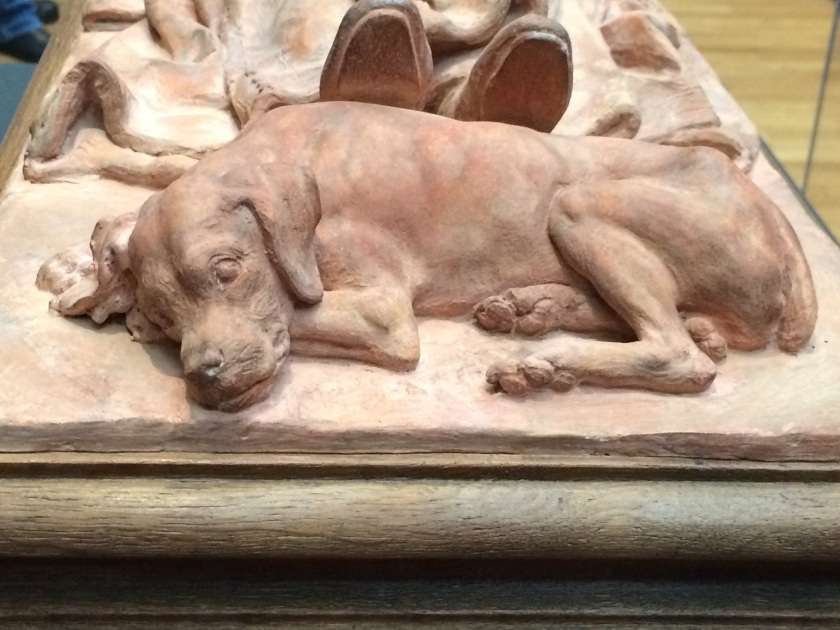 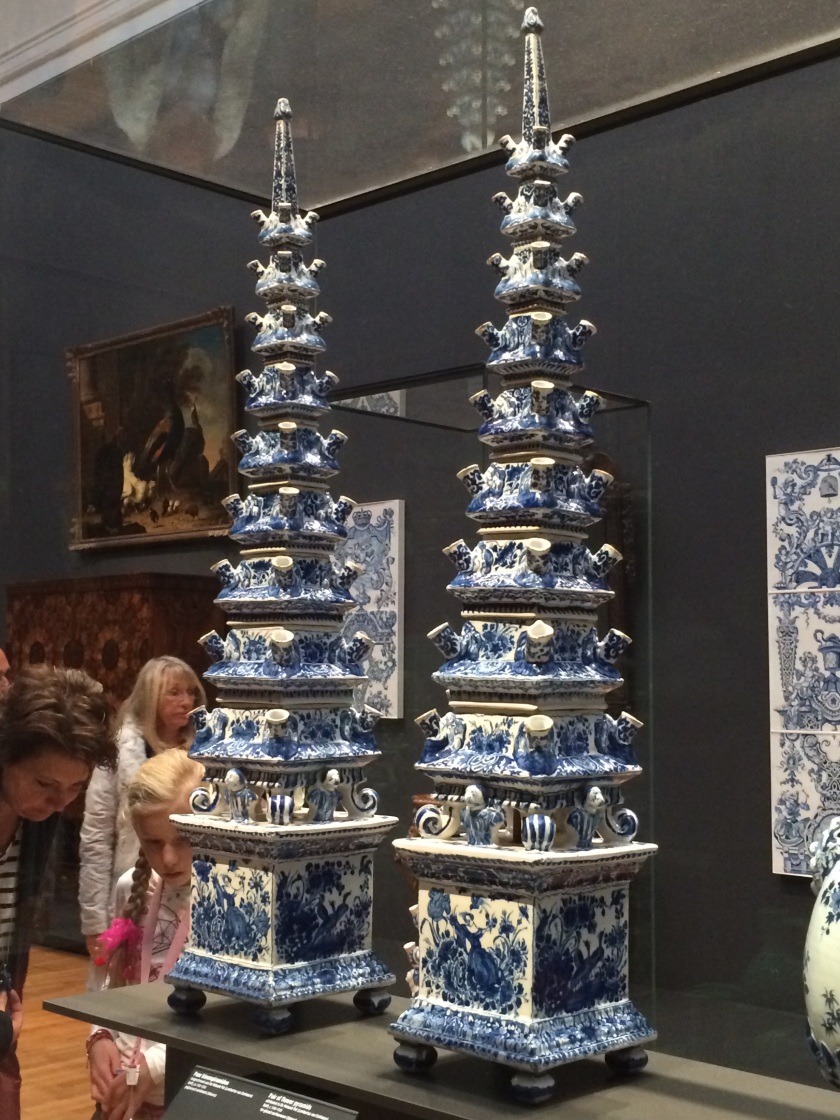 We went straight to the the Rijksmuseum this morning.  We had barely scratched the surface when we went before.  We went back to the “Gallery of Honor”, where they have the Vermeers and some of the Rembrandts, with others as well.  Then we went all the way around the entire floor, which was of the Vermeer and Rembrandt era, with another room with some really exquisite Rembrandts.  Also, there is a still life painter, Coorte, for which they make tote bags and mugs and coasters in the bookshop, but no books or postcards but one exist.  The one book on him had only postage-stamp-sized pictures of his paintings, but all kinds of pictures of him, where he lived, etc.  I checked on Amazon.  No books on him in print.   They had one magnificent Heda in the Gallery of Honor.  I wish they had more of his work. 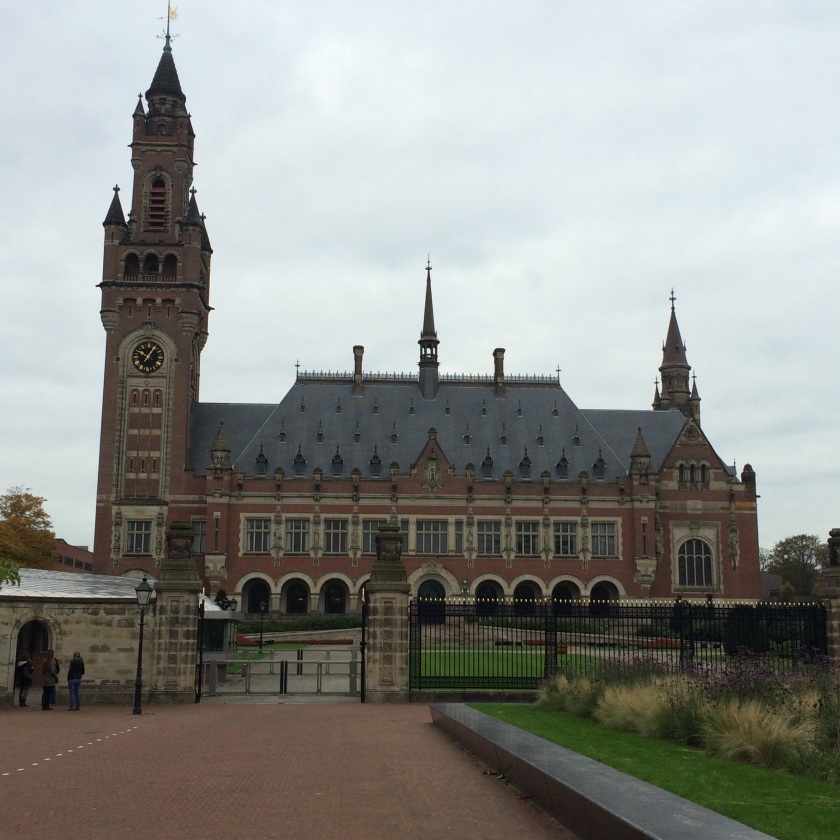 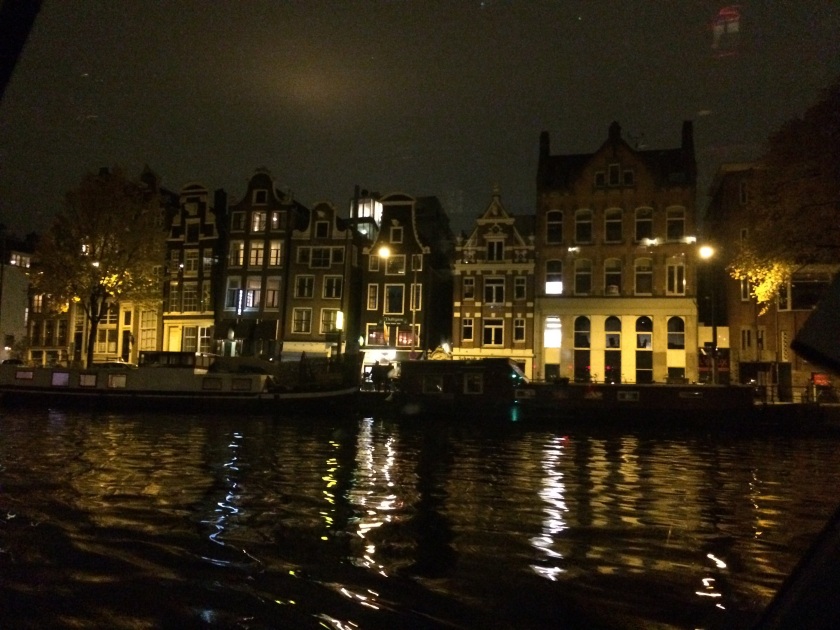 I especially like the black houses that we see as we walk around. We saw this one on our way to the Rijksmuseum. There are so many lovely views over canals. It is just gorgeous almost everywhere we go. 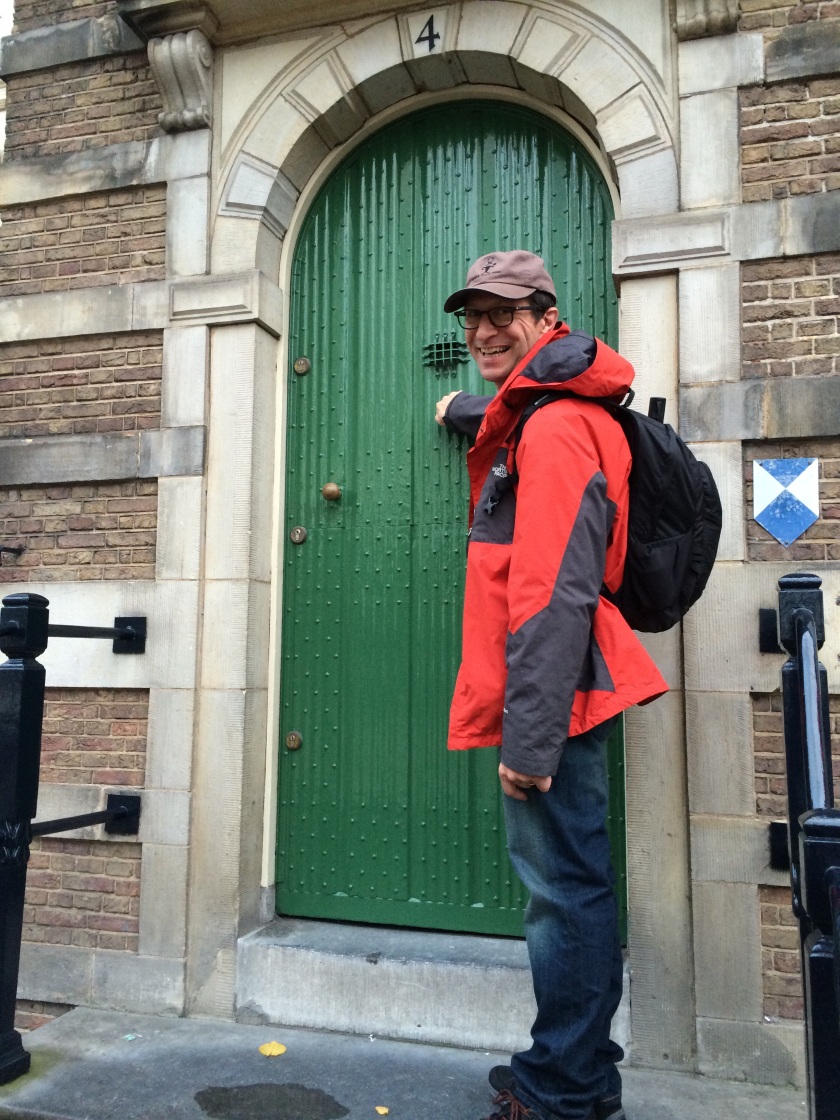 It wasn’t too hard getting up this morning.  We had an amazing (free) breakfast at the hotel, smoked fish, liverwurst, raw beef medallions, prosciutto, amazing cheese, fruit, yoghurt.  We could have had any number of kinds of bread, pancakes, omelets, and any other kind of eggs.  Alas, we won’t be having the breads or pancakes and Jim won’t be able to have the eggs.

We packed liked madmen until 5:00ish on Tuesday, October 20, with our flight leaving at 9:20 PM.  Thankfully, traffic, the seedy parking lot in Revere, and the rest of getting to the gate went smoothly.  I had been going to bed between 8:00 and 9:30 for the prior few days, so I was very glad to put on my eye mask and ear plugs as soon as we got on the plane.  Jim had not been going to bed early and had a nasty cold, so he had a much harder time getting sleepy.  I was taking the homeopathic, Quietude, which helped immensely, with the initial going to sleep and the few times I woke up during the night.  It made sleeping on an airplane, which I usually can’t do, pretty easy.  There was a woman who was terribly, terribly sick on the plane, and I’m still, about 36 hours later, hoping she didn’t have ebola or even the flu!  So far, I’m just fighting Jim’s cold, but beating it with Coldcalm (another homeopathic).