We took the train to Utrecht, only about a half hour away. There were several windmills along the train route, and cows and sheep. The animals are not fenced in. They seem to stay in their fields because of small canals bordering the fields, although I think I might have seen an electric fence along one of the bordering canals.

When you get to the Utrecht train station, the way out is through a giant, cheesy mall. The guidebook has a very funny description of it and also says they are fixing it so that you won’t have to go through dozens of tacky shops before being spit out into the medieval streets.

Utrecht is a university town, has been for hundreds of years. It has two-level canals, with the bottom level originally having wharves that connected to tunnels under the businesses that occupied the higher level. Very ingenious. I wonder why all canal cities don’t have such a system. 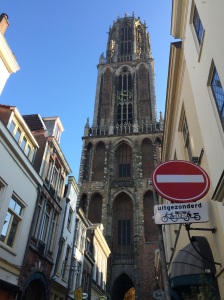 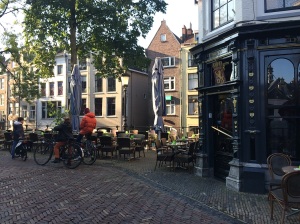 We headed first for the Catarijnen Convent Museum, which had an exhibit on Breughel and witches. It had only five or six Breughel works, but it went through the history of identifying witches and then their representation, for which Breughel was very much responsible: riding brooms, cauldrons, and black cats, but also oil from dead unbaptized babies’ fat and bones put on witches to allow them to fly, their entrance in and out of houses via the fireplace.  And, the Main de Gloire, the hand of a hanged man, preferably the left or the one that perpetrated the crime, with candles made from the dead man’s fat inserted into the fingers.  There were also beautifully drawn manuscript pages of witches and other Satanic things, including several of people kissing goats’ butts, which one does, apparently, if one is a Satan worshiper.  Perhaps television and video games are not such a bad thing.  It doesn’t seem like a great idea letting people sit around in the dark coming up with stuff on their own, does it?

Here is an excerpt from the Wikipedia page on Hand of Glory, recipe included, in case you’re of need:

The 1722 Petit Albert describes in detail how to make a Hand of Glory, as cited from him by Grillot De Givry:[9]

Take the right or left hand of a felon who is hanging from a gibbet beside a highway; wrap it in part of a funeral pall and so wrapped squeeze it well. Then put it into an earthenware vessel with zimat, nitre, salt and long peppers, the whole well powdered. Leave it in this vessel for a fortnight, then take it out and expose it to full sunlight during the dog-days until it becomes quite dry. If the sun is not strong enough put it in an oven with fern and vervain. Next make a kind of candle from the fat of a gibbeted felon, virgin wax, sesame, and ponie, and use the Hand of Glory as a candlestick to hold this candle when lighted, and then those in every place into which you go with this baneful instrument shall remain motionless.

There were many paintings of witches being daubed with oil as they went up fireplaces, naked on their brooms, with a Main de Gloire on the mantle.  It seems there was an adequate supply of hanged men’s hands and dead unbaptized babies!

One part of the exhibit described how women have been blamed for evils of many kinds, starting with the Adam and Eve story, and including disasters such as floods and terrible cold. That is what prompted a lot of burnings of witches, starting in 1430.  In this part of the exhibition, they had a pillory cloak, a wooden thing shaped like a cloak, covered in snakes and toads and with a seat inside to which the woman is chained and carried through the streets to be shamed before exile, usually for lust.  Oddly no pillory cloak for the other participant of such lust…. 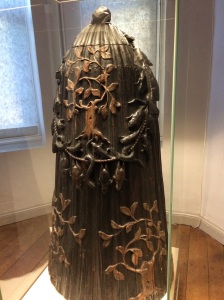 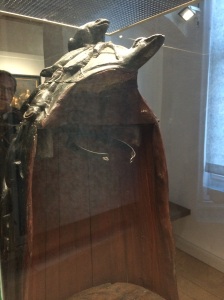 There was also a metal broom/bicycle with a 3D movie running in front of it. You put on the 3D glasses and felt the wind in your face as you rode above a Harry Potter-like Utrecht. 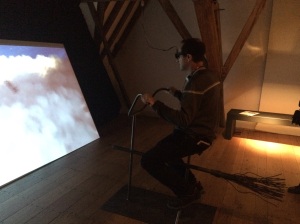 We had fries for lunch.  They had special tables to hold the cones of fries.  Fry shops are the fast food of The Netherlands, apparently.  They are everywhere. 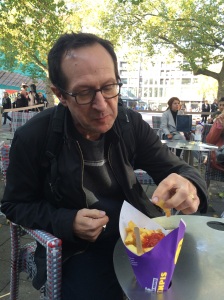 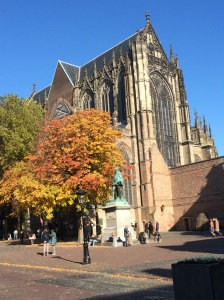 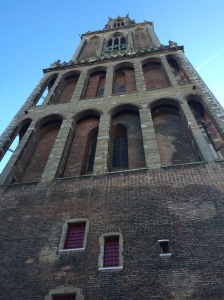 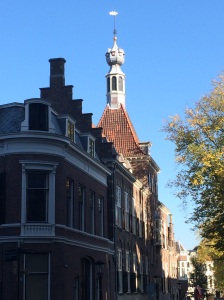 Then we walked to the outskirts of one side of town to see a museum about “Area C”, a poor neighborhood in the beginning part of the 1900s. 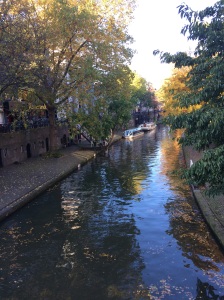 Then we walked all the way to the outskirts of the city on the other side to see, first, the train museum, which had a lovely old interior.  We passed many lovely areas along the way, a beautiful town. 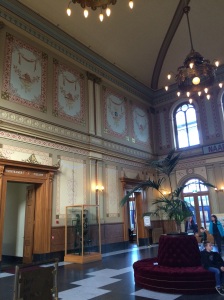 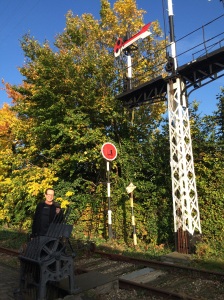 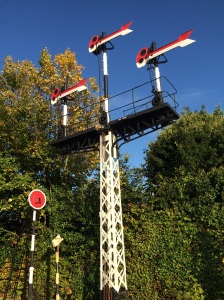 There were some interesting trains from pre- and post-war, including a car that was used to transport people to a concentration camp. All the films about it were in Dutch, so I don’t know which one. It was really, really eerie being in it. 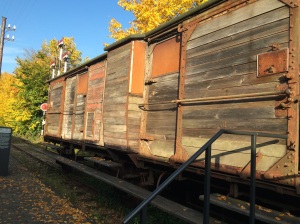 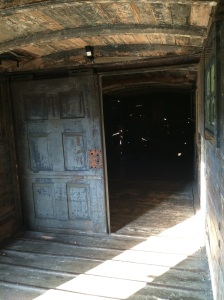 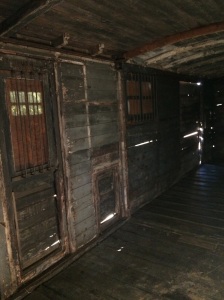 In stark contrast was the royal family’s train from the 30s, with kitchen, bed-sitting rooms, offices, etc. All beautifully decorated in a modern, Northern European style.

Then we rushed to the Rietveld-Schroder House, built in 1924 (the same year as our Sears Dutch Colonial!) designed by the furniture designer Gerrit Rietveld and Truus Schroeder, for whom the house was built. Very spare, very spacious given that it’s not a huge house, with some very ingenious attributes, like the walls rolling out of the way to open up almost the entire upstairs from two bedrooms and a dining room to one big room.  No photography was allowed inside, so we just have pictures of the exterior. 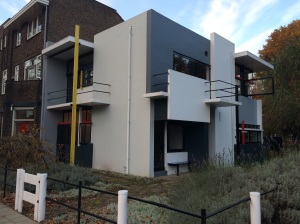 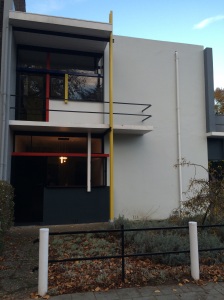 After that, we went back into the center of the town and had a really good dinner, including a wild boar appetizer and duck as an entree for both of us, but it took them over two hours to serve the whole thing.  I was so tired by the time I got the entree that I could have easily done without it.  Waiting that long completely ruins a meal. 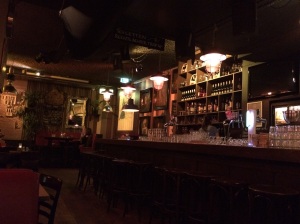 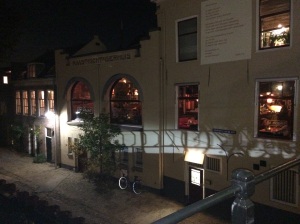 The walk back was lovely, in spite of how tired I was and how badly my feet and legs hurt. 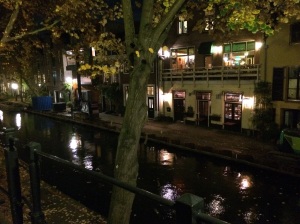