OK, there are a few parts I like in this picture, in the shiny part on the front of the barrel, where the turquoise, gold, white, and purple-black swirl together.  And on the base and trigger guard and body, in the front, where the reflections allow so much color in those tiny areas.

But I made this pastel, 9″ x 12″, struggling the whole time because the size is just too small to really allow me to have freedom with the pastels, to create beautiful, abstract areas of color within the representational picture.  So I decided it would be a study, not a final product, a study for one in a series I have planned, American Still Life. 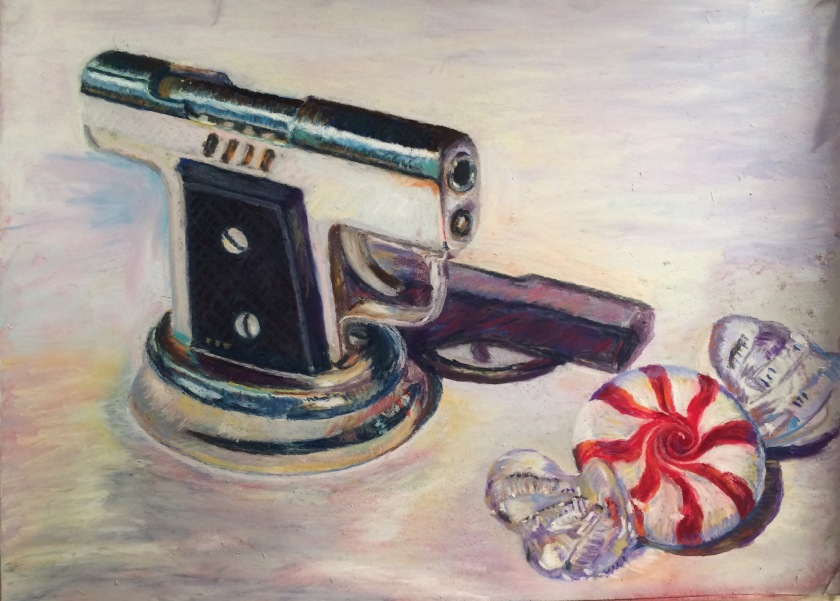 I have struggled to get myself to almost finish this – the right hand side of the wrapper on the peppermint still needs work – and I keep worrying about the ellipse-on-ellipse-on-ellipse of the base.  Should I keep fiddling with it?  The size also frustrates me because the gun’s shadow is too close to the peppermint.  But I made myself (almost) finish this because I thought it would be cowardly somehow to abandon it.  And I did learn a lot about working that small.  It really was a good exercise to make myself keep working on it. But I didn’t love it.  I kept wanting it to be bigger.

So I decided I would make the final picture and the others in the series 36″ x 48″.  So, did I start on that?  No, I started drawing these at night, the first done between midnight and 2AM one night while I was sort of watching British TV murder shows, and the second done with me holding the tiny paper under my bedside light trying to see in the dark while I sat in bed and talked to Isabel: 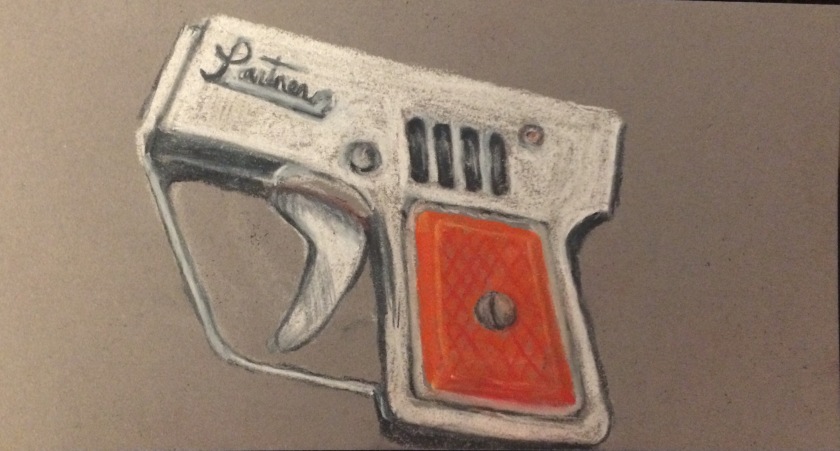 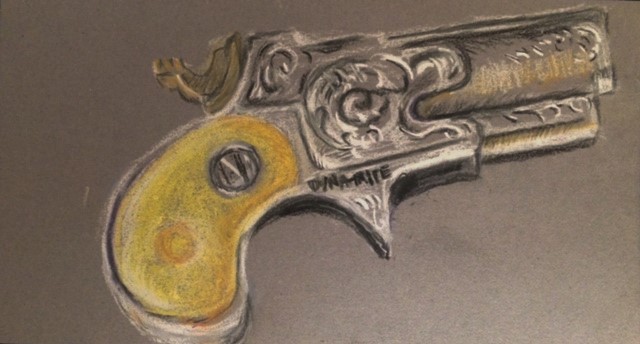 I’ve never drawn anything that small before.  And I was totally in the zone, drawing along, even the scrollwork on “Dyna-Mite” and the hatching on the stock of “Partner”, not feeling at all that the pastel pencils were too big, which I normally feel on a much bigger picture if I get them out.  This is not normal for me.  I hate working small, and crazy busy detail usually drives me crazy.  (Although I did do every divot in the dish towel in the Swedish Fish picture – see Gallery.)  But perhaps because I didn’t take these pictures too seriously – I was drawing under silly circumstances, after all, not at an easel in the sunroom that masquerades as my studio – they fed something in me, put me in that zone of contented scratching at the paper, watching elements start to pop, colors start to blend.

I’m still going to do my American Still Life series in 3′ x 4′ pastels, but I’m glad I just did these.  I think these are as close to “whipping something off” that I am capable of.  But who knows, I didn’t think I’d do these miniatures.  It is fun being on a ride with nice surprises.

[A footnote about my subject matter lately.  I am drawing toy guns, not real ones, and I’m hoping I don’t have to explain that these pictures are not a paean to guns.  I don’t like explanations of why people draw or sculpt what they do, so I’ll leave it at that, but I have a lot of people asking me why I’m drawing guns.  Here’s my answer: They’re toys; it’s not a paean.]

One thought on “Size Matters”