We packed liked madmen until 5:00ish on Tuesday, October 20, with our flight leaving at 9:20 PM.  Thankfully, traffic, the seedy parking lot in Revere, and the rest of getting to the gate went smoothly.  I had been going to bed between 8:00 and 9:30 for the prior few days, so I was very glad to put on my eye mask and ear plugs as soon as we got on the plane.  Jim had not been going to bed early and had a nasty cold, so he had a much harder time getting sleepy.  I was taking the homeopathic, Quietude, which helped immensely, with the initial going to sleep and the few times I woke up during the night.  It made sleeping on an airplane, which I usually can’t do, pretty easy.  There was a woman who was terribly, terribly sick on the plane, and I’m still, about 36 hours later, hoping she didn’t have ebola or even the flu!  So far, I’m just fighting Jim’s cold, but beating it with Coldcalm (another homeopathic).

Our first impression, immediately on arriving at the airport, was how clean and efficient everything was.  I tried to take a picture out the hotel shuttle’s window of these two guys with bright green jackets with “Gum Busters” on a Ghost Busters-like logo on the backs.  They had carts of what I assume were different chemicals and a long wand which sprayed the chemicals and perhaps steam onto the gum, which they then scraped up.  They were happily going about their job, not seeming resentful or disgusted at all.  I wondered if they ever chewed gum and if they dreamt about globs of it all night!

The Netherlands are full of clever cleaning machines with the people operating them and those backing them up with brooms all seemingly happy to be making things clean.  There is a tremendous pride in the city, apparent everywhere.  People have tattoos of the city’s logo, three red Xs in a vertical row, which comes from a coat of arms from way back.  The three Xs are on posts throughout the city, on almost every municipal piece of metal.  I saw a guy, later on while we were having lunch, cleaning a waste can on the street.  The waste cans are also of moderate size and never overflowing.  I even saw someone cleaning big rubber waste cans that businesses use, and you can tell.  You go by a huge garbage can and it’s spotless.  There is almost never a time that anything, the streets included, is dirty, and almost nobody is grumpy or appears put-upon for having to do a job.

Our first day, because we took a red-eye, we arrived at the hotel around 10 AM.  Our room wasn’t ready, but we expected that, so we left our bags with the staff, had a coffee in the lobby, and then went exploring. 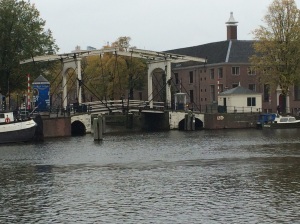 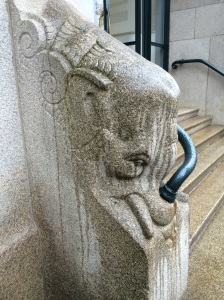 We wandered around Utrechtsestraad, a couple of blocks from our hotel, looking in the shops and checking out the restaurants.  The street has great shops — I want to go back and explore more.

We had lunch at an Indonesian place, Tujuh Maret, lovely, refreshing food, a lot like Thai, but lighter.  The staff was lovely, very friendly and willing to help out.  And everything everywhere, from the minute we stepped off the plane, was in English as well as Dutch.  The restaurant had the menu in English, and nobody seems to mind that you aren’t speaking Dutch.  Apparently it is a requirement for permanent residency that you have a working knowledge of Dutch, but it so easy to get around and see things.  We are very lucky to have English be the universal language!

We wandered a bit more along the Amstel river, along canals.

We stopped at FOAM, the photography museum just a block over from the hotel.  We bought our Museumkaarts, the best deal there is, 59 Euros for free entry to every museum we went to, large and small, except for the tiniest one, the Houseboat Museum.  It works all over the country, so the museums we went to in The Hague, Utrecht, and Haarlem were all free.  At FOAM, there was an exhibit called Magnum Contact Sheets, which, as the FOAM website states, “consists of 60 contact sheets and associated single images and offers a chronological overview of outstanding historical moments from the 1930s to 2010. ”  It showed the contact sheets from which iconic images were chosen, Che, Nixon, D-Day, JFK.  It was a great exhibit.

Afterwards, we went back to the hotel as it was well past 3:00, which is check-in time.

This is the view of the Herengracht canal out the lobby window.  Herengracht means “gentleman’s canal”, and is the grandest of the big three, the other two being Prinsengracht, prince’s canal, and Keizersgracht, emperor’s canal.  The canal houses are less grand as the level of royalty goes up.  I guess taxes didn’t pay like business! 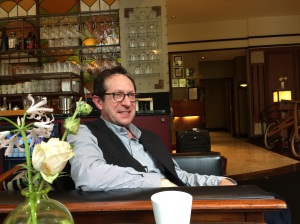 Above is Jim, feeling a bit under the weather still, as we have coffee in the lobby before heading out to Utrechtsestraat.

The bridge on the corner where our hotel is.  Tons of bikes everywhere, chained to every surface a chain will go around, and you better stay out of their way.  I think they’re more likely to run over and kill you than a New York taxi!  Everyone cycles at the same speed, a good clip, probably around 15-20 mph, which makes sense because there isn’t a lot of room to pass, so you can’t really go faster than those around you and I can’t imagine what would happen to someone going slowly!  They don’t want to stop, probably because they don’t want to lose momentum.  There is often a constant stream, like an invasion of alien creatures, all racing by like lemmings toward a cliff.  The bike lanes are not an afterthought, and the bikes don’t have to compete for street space with cars, buses, and trams.  There is so little parking for cars that bike travel is far more realistic.  And the trams are on tracks, so they never get stuck in traffic like cabs or buses in New York.  In fact, you see very few cabs or buses.  I don’t think there are municipal buses, just the trams and one subway line.

The building on the right is the Amsterdam City Archives, which has great exhibits and information on the city.

Whenever Sundial Wire sends a FedEx package or buys USPS postage, as well as ever other Amex purchase made, we get Amex points.  We rack up quite a few, so we were able to book the travel and hotel using just points, no cash at all.  So we booked a really nice hotel without having to even think about what the per-day charges were.  It was all about whether our points would cover it. Although we didn’t spend masses of time at the hotel, it was really nice to have a really nice place to stay in a totally central location, beautiful, quiet neighborhood.

The hotel is called The Banks Mansion.  Once you walk in the door, everything is free, coffee, liquor, beer, water, soft drinks, and snacks in the lounge area near the lobby, everything in the mini-bar, breakfast, the liquor that’s in your room, everything.  (Notice the bar with gin, whiskey, and cognac next to the wardrobe in the room.)

We’re on the fourth floor (European third floor) with a French balcony. (Apparantly the French just want a balcony over which you can open window, not where you can actually step out or sit in a chair, but still lovely to open the floor-to-ceiling windows.) 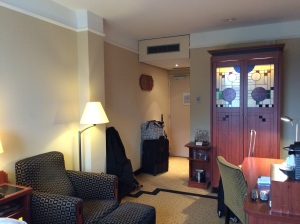 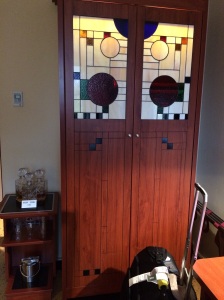 The view, left and right. 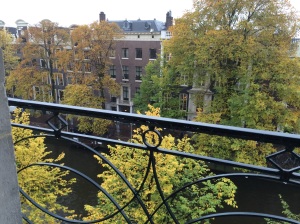 Later, we went to dinner at Piet Leeuwn Tavern and had giant steaks with mushrooms and the local drink, genever, a locally brewed gin-type drink.  The tavern is a “brown cafe”, a pub where decades of smoking has turned the walls brown.   (No smoking allowed indoors anymore, but many, many people smoke here.  Almost every restaurant has outdoor seating with heaters and blankets so the smokers can have a smoking table.  And yes, many, many people are smoking other things on the street.  It smells like hash, very acrid, but it has to be the local pot because they are smoking joints, not pipes.  It is not legal to smoke pot on the streets, but it is everywhere.)

It was a lovely evening, our first walking from one gorgeous spot to another. 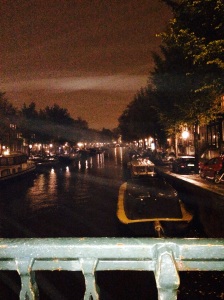 The Banks Mansion at night.