It wasn’t too hard getting up this morning.  We had an amazing (free) breakfast at the hotel, smoked fish, liverwurst, raw beef medallions, prosciutto, amazing cheese, fruit, yoghurt.  We could have had any number of kinds of bread, pancakes, omelets, and any other kind of eggs.  Alas, we won’t be having the breads or pancakes and Jim won’t be able to have the eggs.

We got going fairly late, but finally got going and went to the Van Loon Museum, the only fully renovated, accurate canal house.  It is the restored house of one of the founders of the Dutch East Indies Company.  Very lavish and with a lovely, large garden extending back to a coach house.  There were two sundials.

I love this chandelier!

While we were in the museum, a man was dredging the canal.  Video below.

The gold sundial is in the garden at the center of a boxwood and roses area.

Closer to the back of the garden is the sundial below with an orb rather than a vane to cast the shadow, from 1578.  It was quite overcast, so we couldn’t see it working.

The concave parts below the orb are marked with the hours.  You can see the markings if you enlarge the pictures. 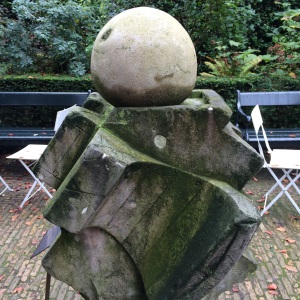 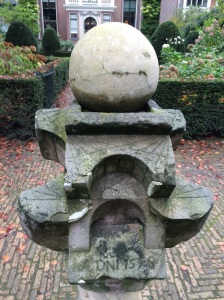 After the Van Loon we walked toward our next destination, Rembrandt’s house.  We went through Muntsplein, a crowded area with American fast food places and French fry shops.  There was this amazing lighting store we need to go back to to get some ideas of things we should do with Sundial.

We got some fries from a place that also sells gyros.  You can see them rotating behind Jim. Yum! 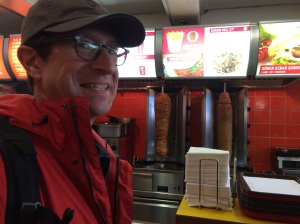 Elephants all over this facade.

There are lots of cheese shops around town.  I like the exterior of this one.

On our way to Rembrandt’s house we walked through the old Jewish Quarter.  Its current claim to fame is the “world famous” flea market.  There were lots of cheap bike accessories, pretty natural for Amsterdam, and then booths of old clothes and some tchotchkes.  Just as we rounded the corner of the flea market, as it takes a bend through the neighborhood, there was a giant heap of old clothing.  Both Jim and I laughed and gagged at the same time due to the super concentrated Eau de Salvation Army wafting from the pile.  That definitely sealed the deal on our interest in the flea market!!

Finally, Rembrandt’s house.  The exterior of the house is original but the inside has been restored. 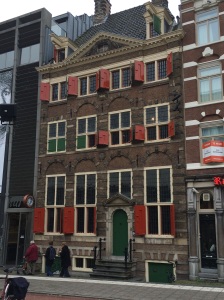 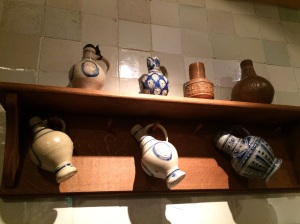 His studio.  There was a demonstration of how paints were mixed, so it was mobbed.  It was interesting.  The pigment was mixed with linseed oil, I think, and then put into a clay pot if it was to be used immediately.  Otherwise, it was put into a pig’s bladder, sealed shut, and immersed in water to keep it 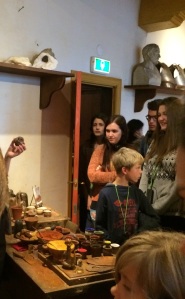 from drying out.  They passed around a pig’s bladder as part of the demonstration.  I couldn’t get a clear shot due to the crowd, but you can see the woman holding the pig’s bladder above the pots of pigment and paint. 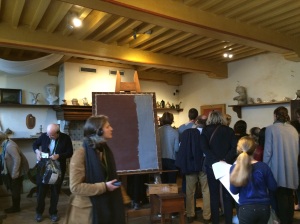 This fabric could be lowered to filter the north light from the window. 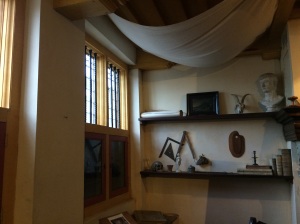 Paint pots on the mantle in the studio.

There was also a printing demo.  The woman demonstrated engraving (carving on the copper plate with a burin), drypoint (using a drypoint needle to gouge so that there is a burr along the line, making a coarser, more easily worn-down line), and etching (where the plate is covered in a resin/wax medium and then scratched off so that an acid bath etches the areas where the medium has been removed.)

This is a Nutella fountain.  Nutella on waffles seemed very popular in this area.  Probably really good for the munchies.

The Red Light District is the most beautiful place with completely seedy, crappy shops I’ve ever been to.  A very weird juxtaposition.  Filled with tourists, hard to walk down the sidewalk, nobody moving out of your way.  I couldn’t wait to get out of the crowd.  The good part is that the bulk of the city is not crammed with tourists.  They’re there, but not in such numbers that you are completely aggravated.  We visited The Red Light District mainly to travel to other parts of the city, so were spared the crowds for most of the trip.

There were rides in Dam Square, which was also insanely crowded.

Dogs on the war memorial. 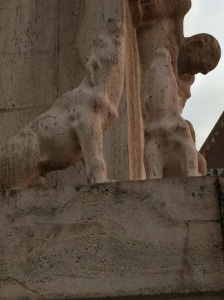 We ended up at Central Station so we could buy subway/tram passes and find out about trains to The Hague and Utrecht. The left hand side of the building has a thing that looks like a clock, but it’s really a wind direction indicator, as was obvious when it started to go counter-clockwise.

We had a late dinner at a place on Utrechtsestraad where we had noticed a sign advertising oysters.  We had taken the menu, which looked really good, and it was.  The restaurant is called Harmsen, a small place with a super friendly staff, recommending wines, totally unwilling for us not to have white wine with our oysters and red with our lamb and beef, but in a really friendly way.  The lamb hash was superb.

When you go to a neighborhood restaurant like Harmsen, you notice how warm the Dutch are with each other and how they seem very happy, laughing a great deal.  It makes me want to move there.  Paris is a gorgeous city, but you get the impression that you would be resented as an expat.  In Amsterdam, if you learned Dutch pretty well, I’m sure you’d be very welcome.  Now we know where to go if Ben Carson is elected!