I especially like the black houses that we see as we walk around. We saw this one on our way to the Rijksmuseum.

There are so many lovely views over canals. It is just gorgeous almost everywhere we go. 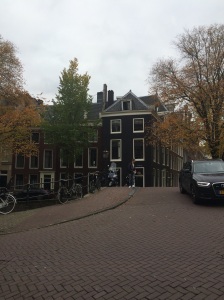 I keep thinking of Elizabeth, whose first car was a Peugeot, as you see quite a few of them here. I didn’t think they were still making them. 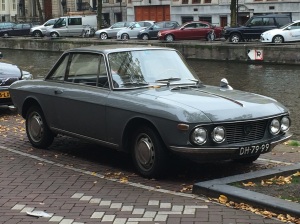 This shop, on the Herengracht, just down from our hotel, was crammed with dishes, dishes, more dishes, and some cutlery. I don’t know how the woman, who we could see through a window, even walked around the shop.

This is our hotel from across the street. The hotel is great. Lovely room, amazing view, everything works, fantastic breakfast. It’s so nice to be somewhere that is just easy and nice. 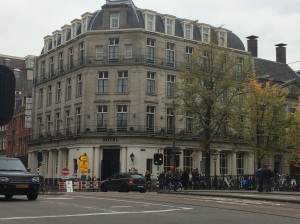 Another black house, between our hotel and the Rijksmuseum, which is a short walk.

Lovely mosaics in the floor of the great hall in the Rijksmuseum.

There were a lot of people around The Night Watch, but nothing like the number around The Mona Lisa. And there aren’t hordes of people standing in front of a picture long enough to snap a photo and then leave. We’ve only seen one selfie stick, outdoors.

I always find the extreme popularity of certain works kind of bizarre.  I know The Night Watch has historical significance in Rembrandt’s portrayal of the men, and it sure is big!  But I take so much more joy from the self-portrait as a young man that the Rijksmuseum has, where the face is in a great deal of shadow, or the one that Mauritshuis has, with the gorget (metal collar).  I’d trade one of those for The Night Watch any day, and yet there are no crowds around them at all.

At the Louvre, you can’t get near the Mona Lisa, but just outside her room is The Madonna of the Rocks, also by da Vinci, and to me, far more beautiful.  And Ginevra de Benci, the only Da Vinci in the states, and again, in my opinion much more lovely than The Mona Lisa, has never, when I’ve seen it, had more than a couple of people around it.  I guess we already knew people were easily told what to do and what to like.  I guess I should be glad that my favorites aren’t the favorites of the masses.

Although no tulips were in bloom in October, obviously, Jim and I agree that we probably picked the perfect time to visit.  (We had wanted to go in September, but our new braiders arrived then, and we had to be around to get them settled in.  That’s September 24 on the left, September 25 on the right! Quite a transformation both in the density of machines in our space and our productivity.  But back to Amsterdam.)

The crowds were not overwhelming, except in the districts where people come to get drunk, stoned, etc.  And the weather was in the 50s and 60s, although I think normally it rains more than it did while we were there.  It was drizzly the first two days and just gorgeous the rest of the time.  I imagine it might be hard to get into the room with The Night Watch from April through September.

This statue was on display between the Rijksmuseum and where we had dinner.  Weird but amusing. 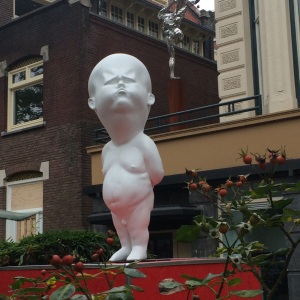 We ate at an Indonesian restaurant just a short way from the Rijksmuseum.  It used to be a “brown cafe” (a cafe with walls turned brown by cigarette smoke, now illegal indoors) called The Posthoorn.  Now it’s Sama Sebo.  We both ordered the rijstafel, which translates as rice table.  There are seventeen small portions, and they were delicious! 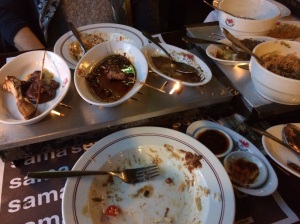 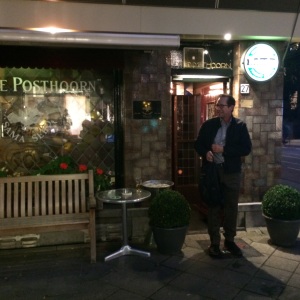 We took a 90-minute canal boat ride.  Beautiful, but hard to photograph.  The last picture is the Banks Mansion from the boat. 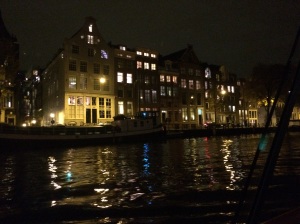 We walked back to the hotel after the boat ride.  A lovely night and a lovely walk.  Much better at night when the threat of being run over by a bicyclist is much lower!